CCSR senior Stella Eliopoulus’s project was to drive donated goods all the way down to Houston, Texas in order to help the victims impacted by Hurricane Harvey. Here are her own words on the project:

Around the time school started again, Hurricane Harvey hit Houston. I saw daily news updates and images online, but I wasn’t able to recognize the extent of the hurricane until a close friend of mine from Houston began to bring it’s impact into perspective. She told me she was out of school for a couple weeks and sent me pictures of the flood damage at her friends houses. The more I heard about her first-hand experience of the hurricane, the more I realized how detached we are from disasters like these unless we are immediately impacted. At this time, I had been trying to think of an idea for this year’s CCSR project. My newfound sympathy for the victims inspired me to create a project that would help victims of Hurricane Harvey. I designed and executed a large, school-wide donation drive that gathered items like clothing, nonperishable foods, and toiletries. However, CCSR lacked the funds to ship everything to Texas. For a month I reached out to organizations, but to no avail. My submaster approached me and mentioned that he wrote a letter to Channel 5 about my project. It turned out that they were interested in interviewing me about my endeavors, so I needed a solution! The 3rd and 5th wards had gotten the brunt of the devastation, so we were using our contact’s church as an outlet of distribution. Even if it meant trekking 1,800 miles by ourselves, these goods were getting to Houston. We rented a 10-foot U-Haul truck and decided to leave that Sunday, planning to spend roughly three days, hoping to arrive in Houston on Tuesday the 7th. We spent Wednesday distributing the goods and returned that night via JetBlue. While it hadn’t been easy, I was prepared to undergo the challenges. It was important to me that this project be carried out, and I knew that by giving up and giving away the goods to a local organization, where I’m sure they would’ve been appreciated, Houston needed them too. Even though media coverage of Harvey damage had ended, citizens were still feeling its effects and it was important that I helped in whatever way I could.

See more at Stella’s blog on this project here

This project was featured on a number of local news outlets as well: 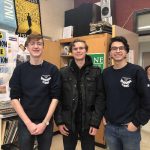