Lucas Ruocco, Isabella DeSouza, and Amer Shah decided to expand the same concepts of an interactive playground painting that educated the students while also providing an easy way to learn at the Roberts Elementary School in Medford. They met with Mr. Johnson to exchange ideas for what to paint on their playground. After a fun discussion with Mr. Johnson, they decided that the school and their students would benefit most from a playground game centered around sports and interaction. The group was told by Mr. Johnson that the little kids love playing games and that although they are fenced to a certain area, painting some games that are suitable for the younger kids would be best. The group decided that having multiple games that are smaller would be more beneficial to the little kids. For the older kids they decided to turn one of the two foursquare spaces into a checkerboard game where the kids can play. In a way to get the students more involved, the student council voted on which designs should be painted on the playgrounds, which truly demonstrates the essence of community in CCSR. 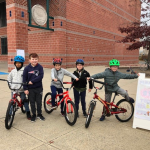 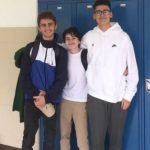 The Basketball Game for Betterment February 13, 2020